Learning from past mistakes on construction projects is hard - collating historical data, interpreting results, and comparing results across your entire portfolio history. With nPlan, we have developed a solution to tackle these challenges using artificial intelligence. Our mission is to help you and your team overcome these complex challenges and deliver your projects successfully.

Learn how we deliver insights to your project team and leadership using an interactive dashboard, integrating with the tools you use today.

We generate predictions based on your schedule, ensuring superhuman accuracy 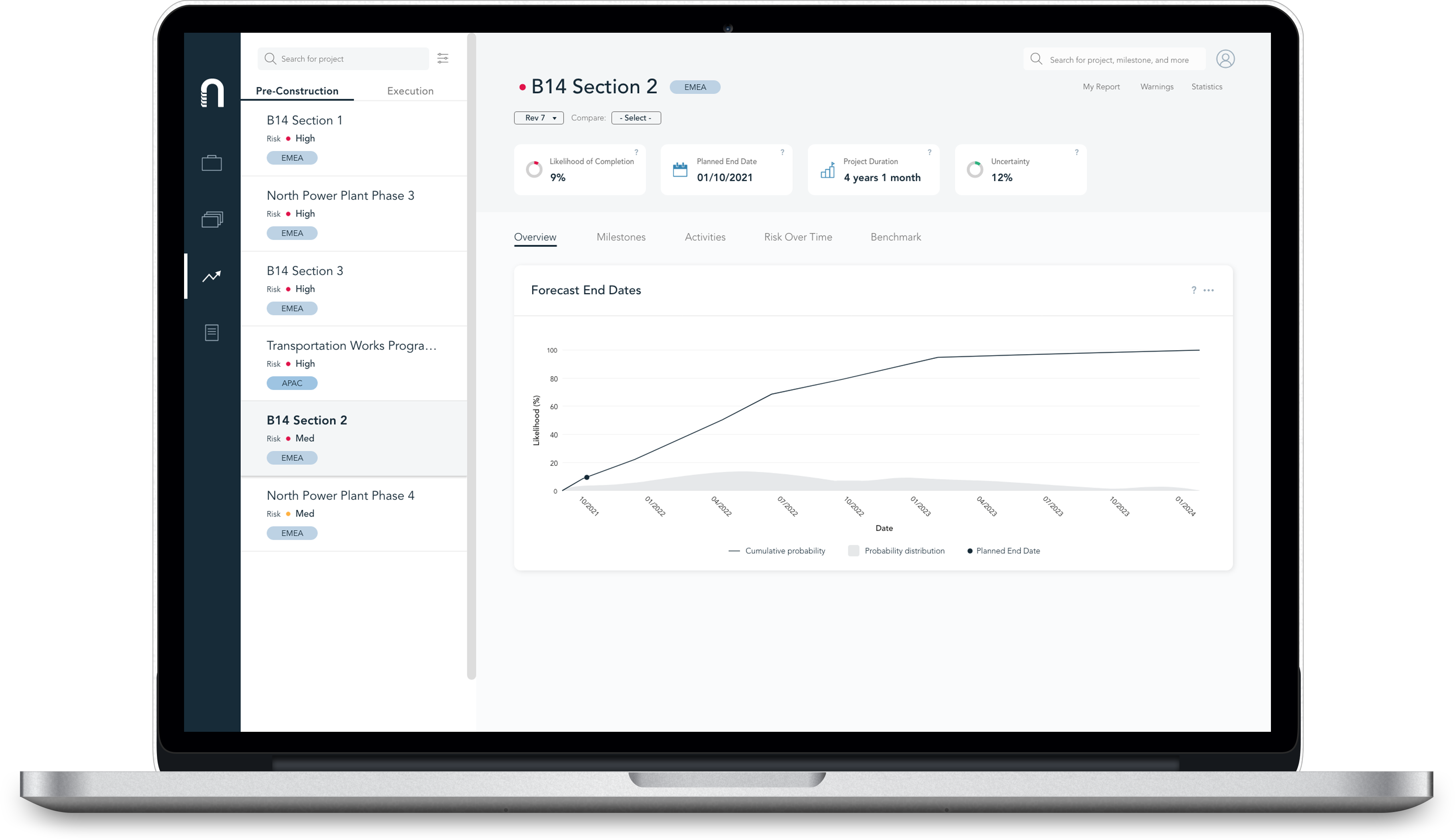 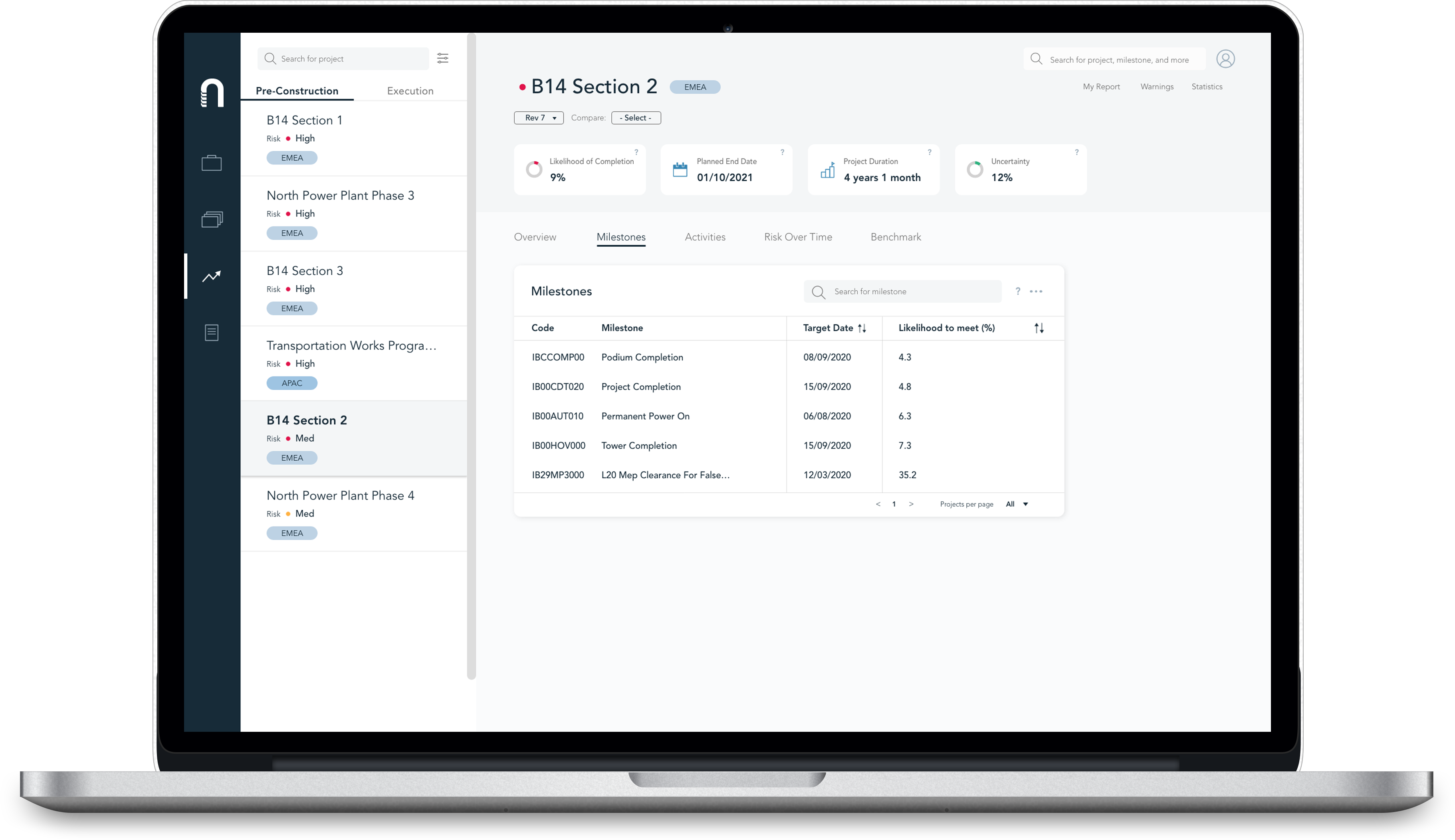 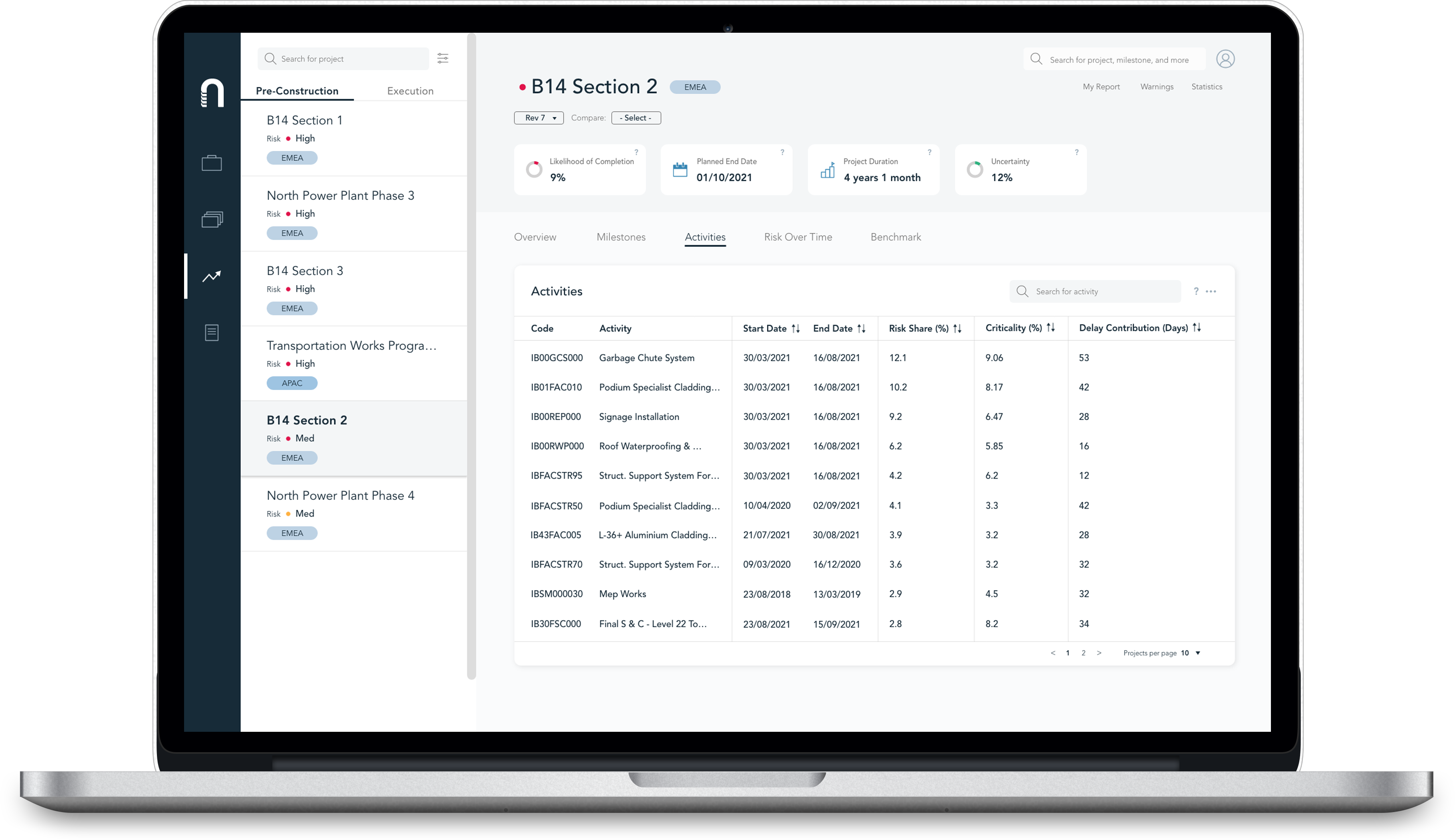 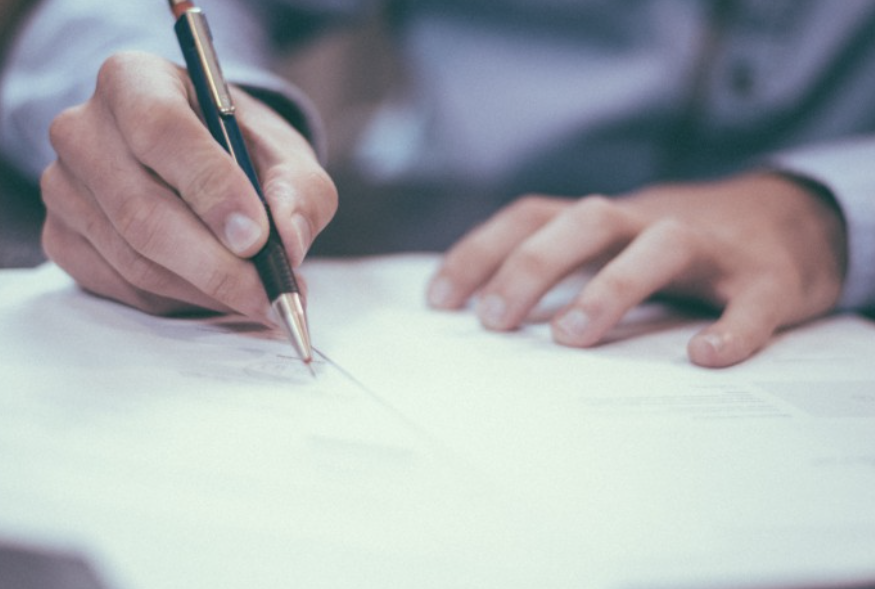 The Future of Contracting 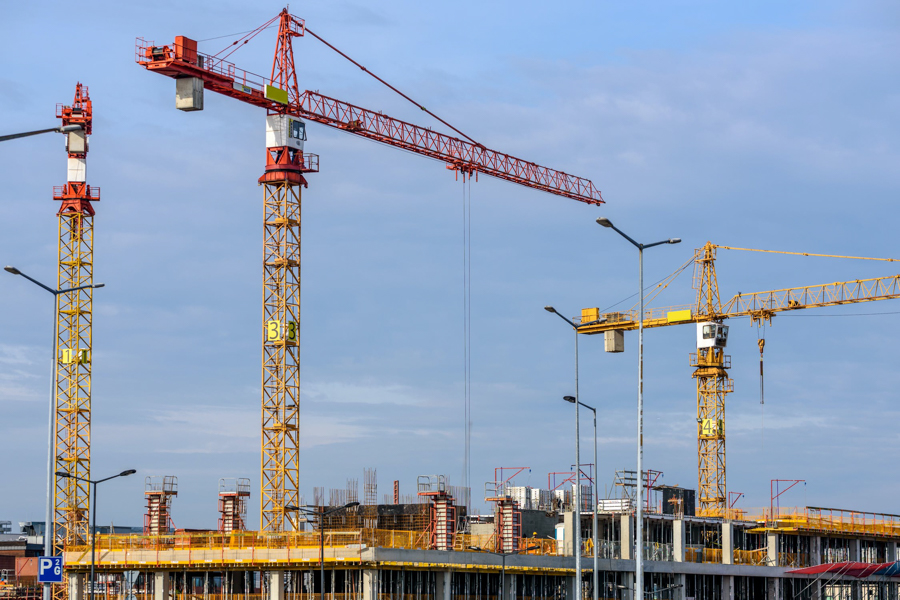 How data from past projects can help us through COVID-19 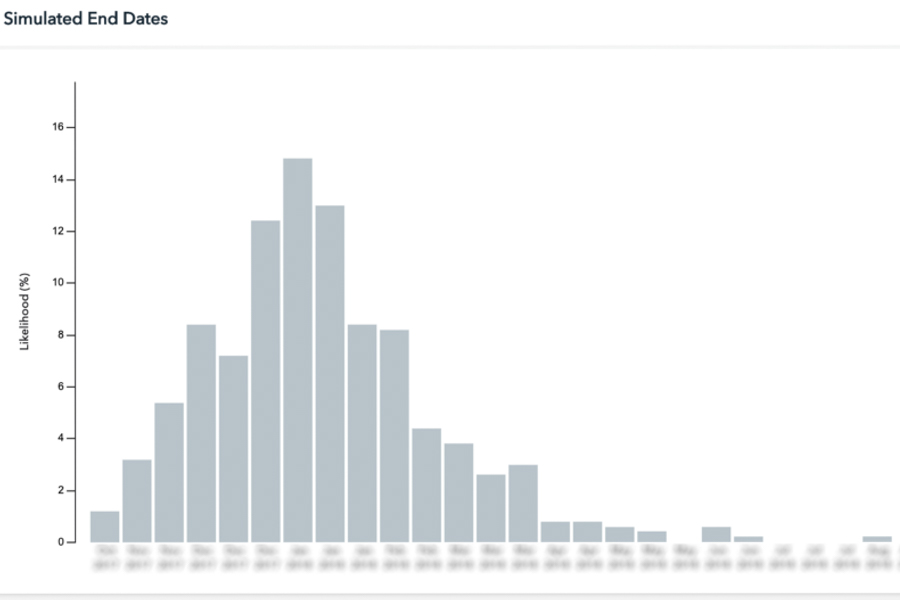 Dan
Dan has an MSc in Applied Mathematics, with a focus on statistics and programming. His previous roles include data scientist at a medical device company, writing algorithms to translate sensor data into clinical results.
Data Scientist
Sarah
Sarah has a background in Operations with the world's finest art, and holds a CIPD Level 5 diploma in HR. She worked for Christie's and commercial art galleries, after studying Classics at Oxford and attaining Masters degrees in Art Conservation and History of Art.
Operations & People Lead
Natalia
Natalia holds a BSc in Computer Science. She worked as a data scientist/engineer at a boutique consulting firm specialising in machine learning and data engineering.
Data Scientist
Maya
Maya holds an MEng in Engineering Science from the University of Oxford and previously worked in quantitative finance.
Software Engineer
Vahan
Vahan has a PhD in Computing from Imperial College London and an MSc in Applied Mathematics from ETH Zurich. He is a visiting lecturer at Imperial Business School.
Science Director
João
João recently completed his PhD in machine learning applications for 5G telecommunications. He has an MSc in Electrical and Computer Engineering.
Senior Machine Learning Engineer
Petra
Petra has a Masters in Applied Computational Intelligence and BSc in Computer Science. She worked as a machine learning engineer, specialising in computer vision.
Machine Learning Engineer
Rares
Rares graduated with a BSc in Computer Science, after which he joined a digital agency and worked as a full-stack developer on a range of projects.
Software Engineer
Amin
Amin has recently graduated with an MSci in Mathematics from Imperial College London, focusing on statistics and scientific computing.
Data Engineer
Carlos
Carlos has a PhD from UCL in biomedical engineering, where he used multi-scale computational modelling and machine learning algorithms to detect, characterize and classify cardiac diseases.
Machine Learning Product Owner
Liam
Liam holds an MSC in Computer Science from the University of Oxford. Before joining nPlan, he worked as a software engineer for a mainframe software house.
Engineering Director
Andrew
Andrew recently graduated with a BSc in Computer Science and previously worked as a software engineer for a large tech consultancy.
Frontend Engineer
Toby
Toby holds an MBA from London Business School. He brings 7 years of experience as a Project Manager at LendLease.
General Manager, Commercial
Lucienne
Lucienne has a Masters in Intelligent Systems, where she practiced Java, Python & Machine learning. She worked at a digital agency, utilising these skills on projects for clients.
Software Engineer
Inneke
Inneke holds MSc in Petroleum Engineering from Imperial College London and BSc in Electrical Engineering. She previously worked as a machine learning engineer in oil and gas/facility maintenance industries.
Machine Learning Engineer
Amy
Amy holds an MEng in Bioengineering from the University of Cambridge and an MRes in Web Science and Big Data Analytics from UCL. She previously worked as a data scientist in the fashion and broadcasting industries.
Machine Learning Engineer
Naman
Naman joins us as a Software Engineer, having recently completed an MEng in Computing at Imperial College London.
Software Engineer
Alan
Alan spent 7 years as a technologist in quantitative finance and has extensive experience in algorithm design and software engineering. In his spare time, he is nearing completion of a PhD in deep learning.
Co-Founder & CTO
Dev
Dev worked at Shell for 9 years as a project manager on Flagship Capital Projects, before authoring the UK’s National Artificial Intelligence Strategy. He also holds an MEng in Aerospace Engineering and has visited all 7 continents.
Co-Founder & CEO
Josh
Josh joined the team as a software engineer, after graduating from Imperial College London with an MEng in Computing.
Software Engineer
Miffy
Miffy has a BS in Structural Engineering from UC San Diego and an MA in Design from the University of Leeds. She previously worked as a Project Engineer, manufacturing composite products for the aerospace industry.
Product Designer
Georgia
Georgia brings 7 years of experience working on major construction projects, most recently as a Risk Analyst. She advised on major schemes worth up to £30bn for clients like Network Rail, Transport for London and large engineering consultancies. Georgia holds BPlan(Hons) and IRM International Certificate in Risk Management.
Principal Risk Engineer

"nPlan's revolutionary machine learning approach to learning from data on past projects is the biggest breakthrough in scheduling in decades."